drop by almeida's Shotokan karate in new bedford or one of it's affiliated schools today ! 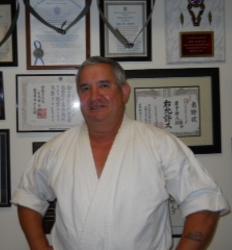 the A.I.K.A. has proven itself through it's students.  We could write a book of the accomplishments  of koncho Almeida, from National Titles to six on one street fights, from the "barkless tree",to the many  other instructors of other schools that look to him for guidance and most importantly to his wonderful loving and  supporting family; but, this shouldn't mean anything to you.  What really counts to you is what his students have  accomplished.

Almeida's students have proven themselves the world over.  Several of them have won national titles  and some have placed internationally.   They have consistently produced new england IPPONE champions in fighting,  kata and weapons.  His students have proven themselves by accomplishments cross training in other arts.   They quickly adapted to kick boxing a few years ago when amateur kick boxing was legalized in Massachusetts  and dominated over students that exclusively trained in kick boxing.   They have held their own training with  world class Aikido, Judo and Jujitsu competitors.   Most importantly A.I.K.A. members become a family, always  there to support one another.

A.I.K.A. offers full spectrum training, we are well aware of the strengths and weaknesses  of the many arts and add the best of techniques to our arsenal.

A.I.K.A. offers qualified rank.  Our ranks can be tracked directly back to the  most renown masters of Okinawa, Hanshi Fusei Kise and Hanshi Seiji Aikimine.  our ranks are earned not given.

some of our members have failed exams or been held back from testing.   This should not be a  discouragement but an encouragement; if everyone earned an "A" on every test in high school  how would colleges determine the qualifications of a student?  Were they all really that good or were  the tests too easy?  When you earn the rank of 1st degree black belt (Shodan), it should mean something  more than just passing a test.

The A.I.K.A. is a low profit organization.    It's done for the love of the art.  The rates charged at our schools are competitively low.   Most of the schools will offer family rates or special rates to college students.   The A.I.K.A. has always and will always be about teaching karate.